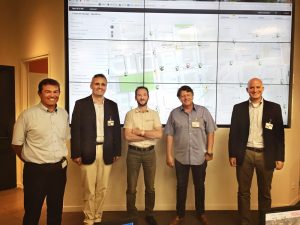 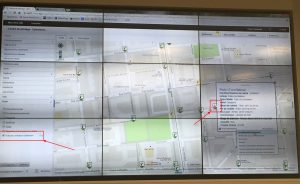 In January 2014, after winning the eight-year contract to manage Grand Lyon’s water services, partly thanks to the inclusion of GUTERMANN technology into the offer, Veolia announced publicly that it will acquire and install 6,000 intelligent acoustic loggers as well as 400,000 smart meters, which would be two major important investments into improvements of Grand Lyon’s water infrastructure in the near future. The stated goal was to reduce leakage in the network to 13% by 2018. In the meantime, Veolia have further developed their centralized control room and their management platform Hubl’O which collects all data from the field and allows 24 hour surveillance of the network and immediate emergency intervention in case of problems. This control room is state-of-the-art in urban water network management and will serve Veolia as a benchmark for future management contracts in other parts of France and the world. GUTERMANN’s leak detection solution ZONESCAN Net forms an integral part of this control room and provides near-real time leak intelligence and alarms.

As part of this strategic partnership between the two companies Veolia and GUTERMANN, Veolia’s daughter company Homerider has developed an AMI solution that can transport both data from the ZONESCAN loggers and the smart meters. The ZONESCAN loggers connect via serial cable to the Homerider radio module which is built into custom-made composite valve chamber lids. The data is collected by Homerider collectors via Long Range radio frequency and brought back into GUTERMANN’s ZONESCAN Net where all calculations are performed, including the critical automatic correlation between all neighbouring sensors pairs. Every morning, the leakage managers can then investigate all new leak indications online. This virtually replaces the need to send leakage operators out to the field to verify and pinpoint the leak, and it minimizes the otherwise high rates of false alarms and missed leaks, inherent in other existing leak monitoring systems.

The General Manager of Eau du Grand Lyon, Mr. Serge Sassus, shared the operating team’s enthusiasm when saying: “The ZONESCAN loggers are a key part of our offering to the city of Lyon and will help us achieving our ambitious goals of significantly and rapidly increasing the city’s water efficiency”. Claude Gutermann, the president of GUTERMANN said: “We have been working with Veolia for many years to get to where we are now, and everybody involved can be very proud of what has been achieved.” By the end of 2015, the entire ZONESCAN equipment will be fully deployed and operational.

Any inquiries about the project can be addressed to uri.gutermann@gutermann-water.com.