A new upgrade of Gutermann´s leading and award-winning unique NB-IoT logger with a sophisticated 3D Motion sensor has just been announced for the World Water Loss Day 2022!

The first generation of this advanced NB-IoT acoustic noise logger system with unique and compelling automatic correlation features was officially launched just 3 years ago on the first World Water Loss Day – which was initiated by Gutermann and the IWA Water Loss Specialist Group and endorsed by the large industry associations IWA and AWWA.

Uri Gutermann, CEO of Gutermann, on the new feature: “The added value implemented in this already very powerful logger and its versatile cloud software for the operator is twofold: if a logger has been moved from its deployed static position it has either fallen off the fitting or been removed on purpose. The “Pitch & Roll” alarm from our system will let the operator know if the logger has lost contact with the pipe or has been stolen altogether.”

To the operator this will be shown with a tilted logger icon in the operator cloud software both on the map and in the logger list data. An irregular logger pitch can also indicate that a logger has been dislodged from its original resting position on the valve by animals or flooding.

“So, any gaps for monitoring fixed water networks resulting from non-reporting loggers due to changed pitch & roll positions can be reduced or eliminated with this feature. This gives a utility a a significantly higher asset efficiency of the system and better control of water networks and related pipes – and ultimately to better system performance”, Uri said. 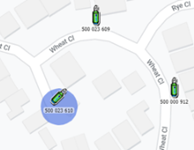 How does this work?

The sensor inside the logger tracks its movements and reports them back to the server and the operator surface ZONESCAN NET (ZS NET).

The software keeps the history of logger movements as well and displays them on request. Both in the histogram and the column “orientation change”.

This feature can also be setup as an “Event Alarm” and emailed to the user.

The 3D Motion Sensor and related software functionality is now integrated in all new NB-IoT-loggers as a standard feature enabling customers to fully benefit from it with the next purchase of loggers.

ZONESCAN NB-IoT leak noise logger for fixed network leak detection with its unique product features have already helped hundreds of utilities and water companies around the globe to upgrade their traditional technologies and methods in leak detection, to improve the efficiency of their water loss reduction programmes and reduce NRW while increasing customer service levels. Since launch, Gutermann has continued to add functionality and features which have led to an overall product offering and performance that is second to none.