Locating leaks on large diameter water mains can be very difficult due to poor sound propagation and increased distances between fittings that can be used to perform correlations from. For a correlator to highlight a potential leak each sensor must be able to receive the signal from that leak. Once a correlation is highlighted it is then down to the software and the user of the software to accurately pinpoint the potential leak as the noise created by the leak may not be heard from the surface due to its depth. The accuracy of the correlation is important as repairing a large diameter water main can be expensive as they are typically deeper than smaller diameter water mains, so excavations are larger. They may also run through the centre of busy roads which mean additional traffic management measures need to be in place.  There is also the potential disruption to supply. If the water main has to be isolated to carry out the leak repair, it may affect customers downstream meaning they will be without water until the repair has been completed.

A client had a known leak on an 18” cast iron water main as water was showing on the surface. The location of the surface water was in the middle of a very busy road downhill from a roundabout. The road had to be closed before repairing the leak, this meant costly traffic diversions had to be put in place.  Correlations were required to accurately pin point the leak location to limit the size of the excavation needed to repair the leak.

To carry out a correlation survey using the Gutermann Trunk Main correlator with the standard sensor configuration.  Correlations were required to accurately pin point the leak location to limit the size of the excavation needed to repair the leak.

Upstream correlation: Point of interest on sensor ‘B’ located on the valve on the entrance to the roundabout (location of surface water). This correlation showed the leak location to be beyond sensor ‘B’ (out of bracket). 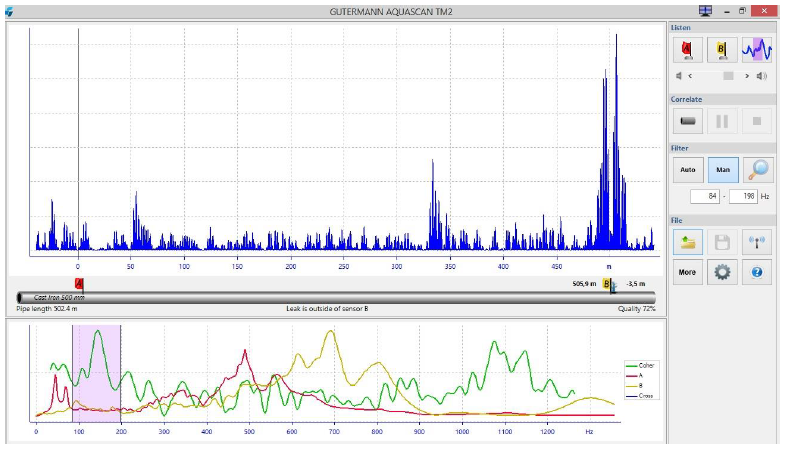 Downstream correlation: Sensor ‘A’ was then moved to the next available valve 826m downstream of the surface water with a point of interest gained 31.3m from sensor ‘B’ located on the valve on the roundabout.  (Note: Peak suppression was used to gain point of interest 31.3m from sensor ‘B’.) This correlation gave confidence to proceed with the planned repair of the water main. 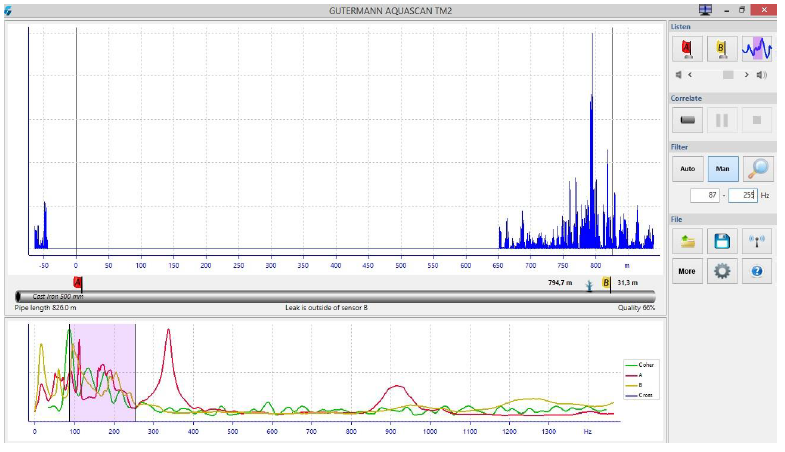 Three water leaks were located over a distance of 826m using the GUTERMANN AQUASCAN TM2 trunk main correlator in standard configuration, one known leak and two additional unknown leaks. Locating the known leak gave the client confidence that the leak would be repaired within a scheduled time during the road closure. The two additional unknown leaks were located on joints where the water main followed the contour of the bridge.