> Download Case Study as PDF in A4 or in US Letter.

In May of 2021, following their success with ZONESCAN 820, the City of Logan decided to implement a 300-point ZONESCAN NB-IoT logger system. The new system was in immediate success. After only a few months, Logan Water found 13
service/main leaks and 10 customer-side leaks, amounting to roughly 490 KL of actual non-revenue water (NRW) loss. Totaled, the stoppage of these leaks prevented an estimated $261,000 in NRW over a 12 month period.

This case study details two non-surfacing leaks identified by Logan's NB-IoT system in July, 2021. These two leaks alone were estimated to incur losses of $182,000 in NRW annually. The first leak, detailed below, was estimated to cost the utility around $35,000 in nonrevenue water annually.

"Leak identified in DMA 018 - 13 Whitey Street, this morning by loggers as seen in the screenshot, perfect example of what they can identify."  Steve Young, Water Project Supervisor at Logan Water

Upon investigation, Water Project Supervisor Steve Young detected no signs of surfacing water in the area, but after further inspection with a ground microphone, the leak noise was detected on a connected 20mm poly service line:

"I Confirmed on site this morning that service to number 13 Whitey street has a quality sound and identified leak location...Leak to be repaired by Water Projects crews on Thursday. Refer to (above) photos indicating no sign of a leak." 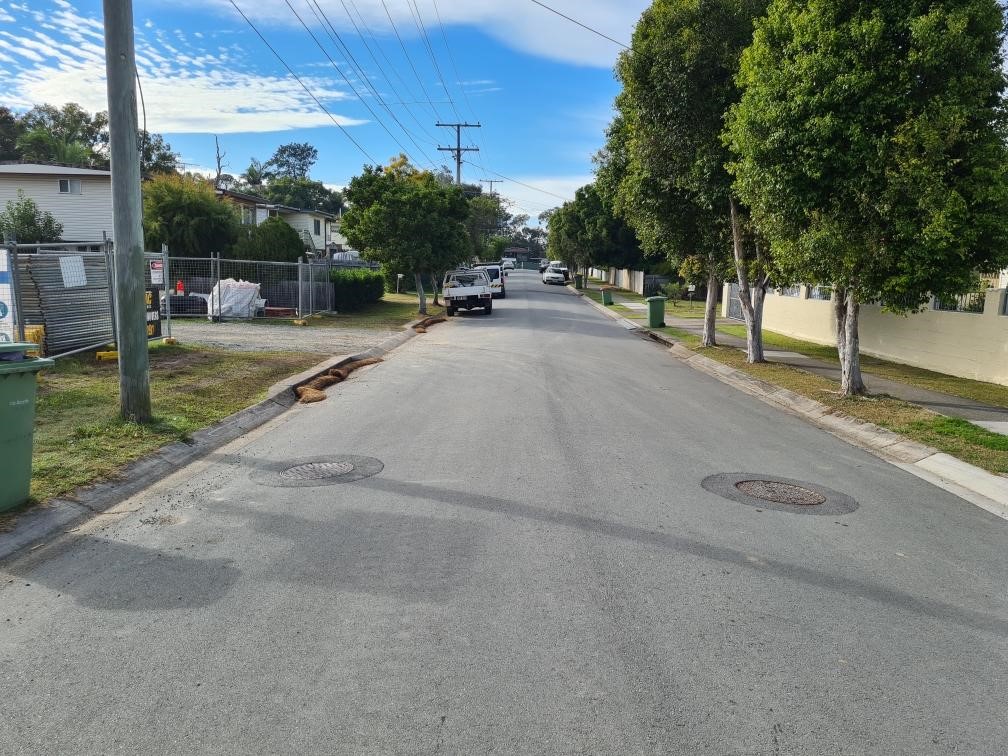 Excavating and measuring the pinpointed leak

The City of Logan's Water Project Crew was dispatched to the site later that week to excavate the service line leak. With their ZONESCAN.net Correlation Report as reference, the crew discovered that the pinpointed spot was directly on top of a poly service line connection. While no loggers had been placed on service lines, the NB-IoT loggers were still able to pinpoint the Ferrule connection of the leaky service. With the aid of their Gutermann AQUASCOPE 3 ground microphone, the crew pinpointed the leak along the service line and started digging. The following comprehensive Correlation Report details the spacing between loggers, the distance of the leak from Logger 1 (L1) and Logger 2 (L2), the nearest address to the pinpointed leak location, a helpful Google Street View of the correlation spot. The report also contains cross-correlation and signal spectrum graphs. The blue peak on the cross-correlation graph represents the leak location ,while the vertical black lines represent the logger positions. 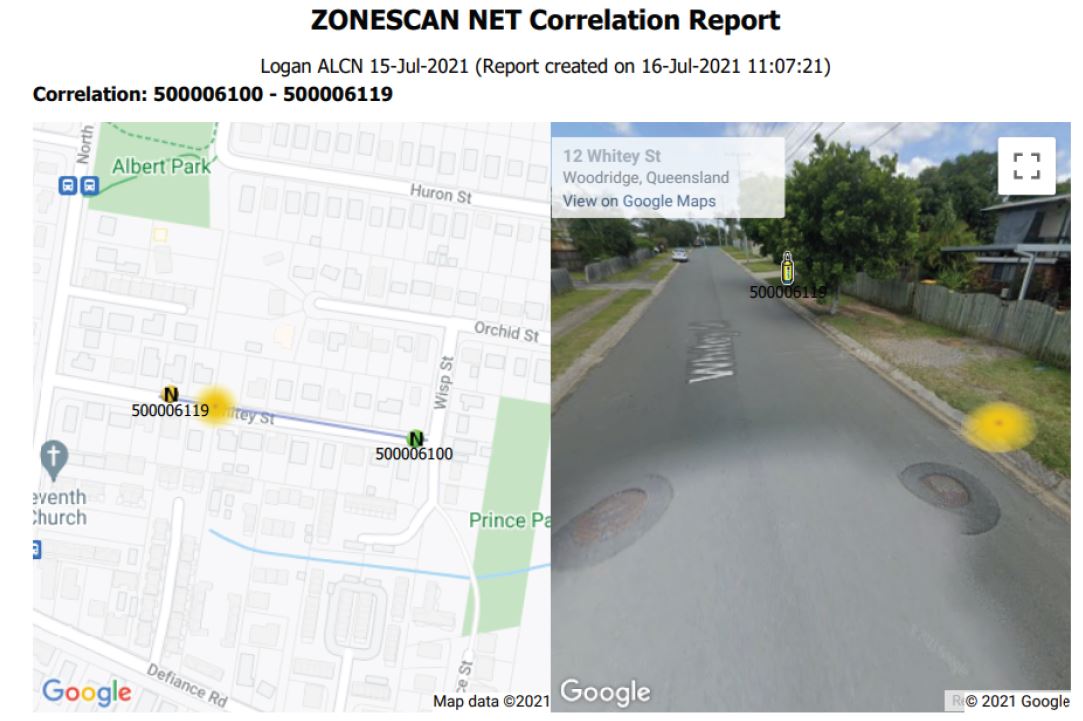 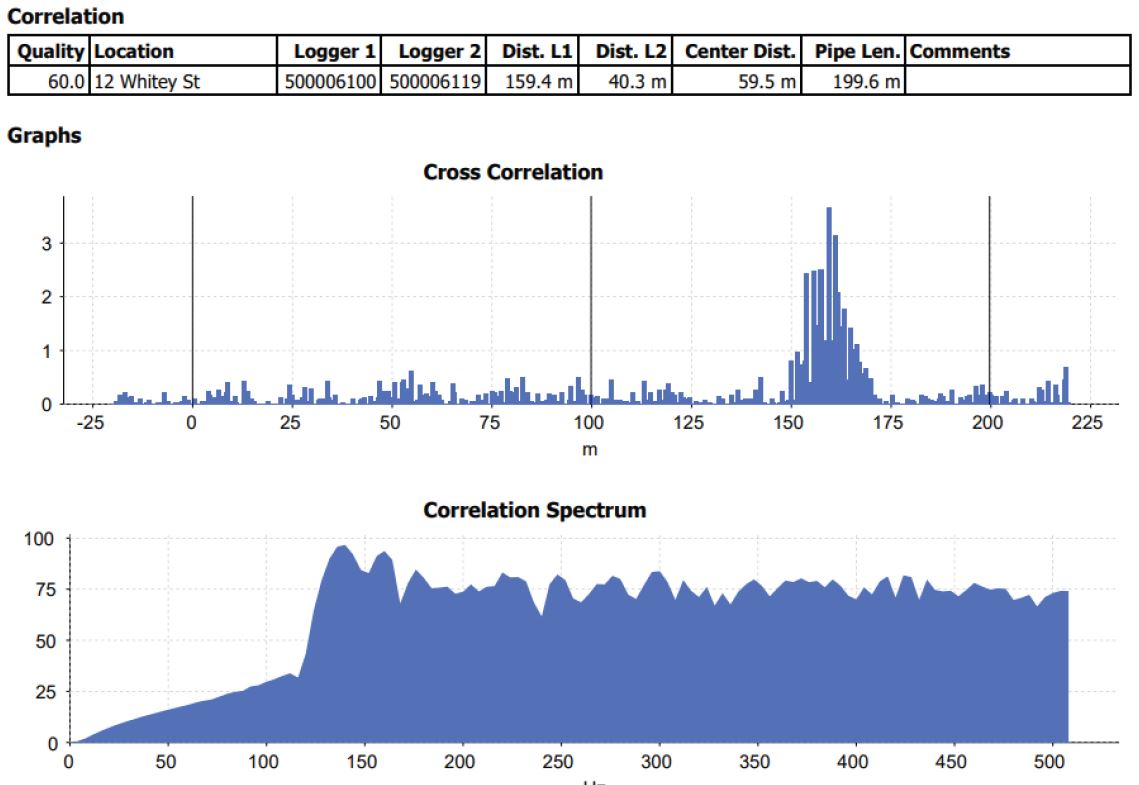 The economics of fixing one leak fast

Using a flow meter, operators found that the leak was dispelling water at a rate of 22.15 liters per minute. From notification of the leak to leak repair, the total runtime of the leak was 51.15 hours. Taking into account the leak's current flow rate, Steve was able to calculate the total water loss from identification to repair, as well as the estimated losses from non-revenue water had the leak gone unnoticed.

"Great work Steve. Interestingly, although we now get these fixed in a number of days, traditionally if they didn’t come to surface it could be a year between active leak detection sweeps. So this leak had the potential to cost us about $35k. Really good work." - Howard Witten, Manager Water Service, Logan Water 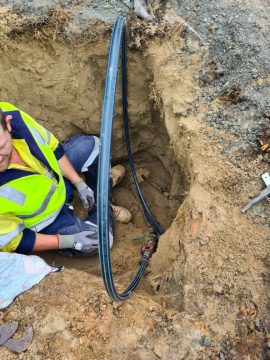 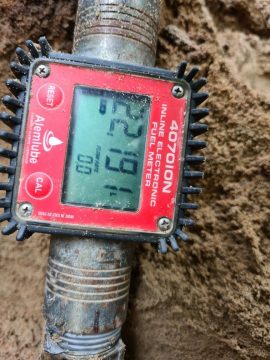 Two weeks later, another leak was captured in their 50 NB-IoT logger area DMA 007. The crew investigated the site and discovered the leak source: a 20mm (0.75 in.) poly road conduit. The line was repaired temporarily until a new conduit could be installed. The following is a brief summary of this leak from identification to stoppage, including estimated potential non-revenue water losses for the year: 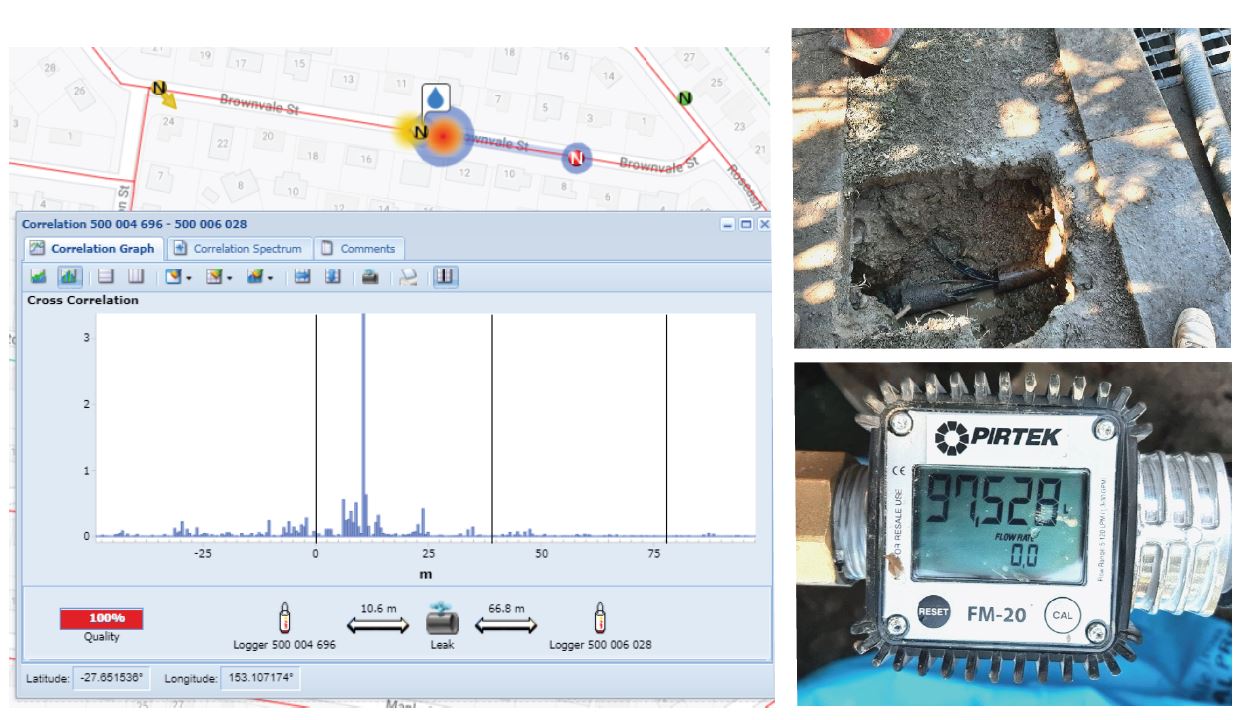 Following their success, the City of Logan set about to create purpose-built, ultra-secure chambers to better cover their mixed material system with NB-IoT Loggers where no valves are present. A saddle tightly grips the pipe underground and feeds into a shallow chamber at ground level. The NB-IoT logger is attached magnetically to the top of the saddle, thereby allowing the logger to listen to the pipe while resting mere inches below the surface. 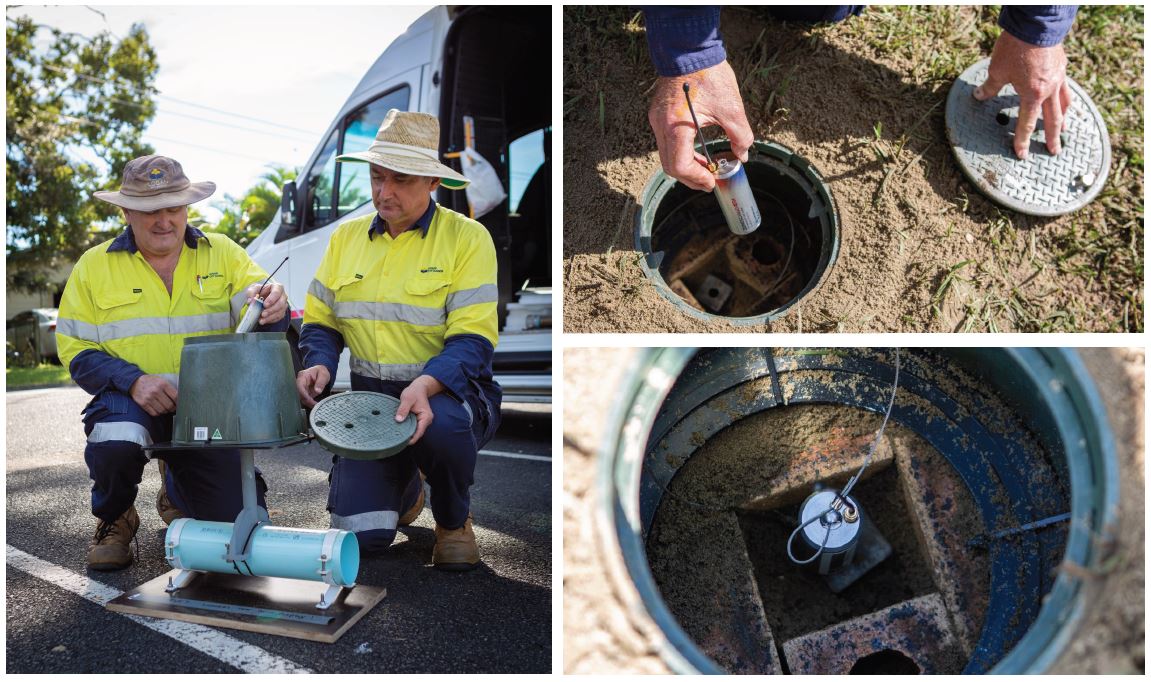 Had the City of Logan relied on their annual pro-active leak detection sweeps, the above leak had the potential to go unnoticed for an entire year. However, with their NB-IoT Correlating Logger system and ZONESCAN.net's daily leak notification software, water operators were able to locate and stop the leak just days after it appeared. All calculated, the two leaks detailed in this case study had the potential to cost the utility around $182,000 in non-revenue water annually.

Assuming the average water leak costs around $25,000 annually, the system could have paid for itself over the course of its first year. However, though this same NB-IoT system will continue to monitor the City of Logan's water supply network for years to come, large and costly leaks caught early have provided a near full return on investment in the span of only two months.

Next Steps for the City of Logan

After testing NB-IoT Correlating Loggers extensively, Logan currently maintains a system of 300 NB-IoT endpoints. Based on the near-immediate success of their program, Logan will investigate expanding on their ZONESCAN NB-IoT system over the next 12 months. Logan opted for a complete package which includes the product, full data/SIM card provision, and cloud hosting. Gutermann are now offering this and other customizations to meet demand from municipalities and leak detection companies around the world.

By utilizing a wholistic approach to leak detection, the City of Logan is set to save hundreds of thousands of dollars in non-revenue water in the coming years by pro-actively localizing, locating, and pinpointing leaks with Gutermann equipment.